Italian version - and more than 110 downloads!

Today we've uploaded the Italian version on itch.io, which pretty much marks the final milestone for The Madhouse Swing development. It's been a thrilling ride, and we just hope everyone is having fun playing our game.
It's always surprising how small projects like this eventually end up taking a huge toll on your time and energy, but seeing that over one hundred people are actually noticing it and deciding to waste some hours reading through our scribbles makes it really worth the effort.

Thank you for supporting us and giving our project a chance.

See you in the future, for fixes, updates, and maybe something more.
Pubblicato da Spinto Studios a 06:35 Nessun commento:


We're really happy to tell you that the final version of Akumangel: The Madhouse Swing has now a release date, so take a pen and write down a note:

Some of you might have thought we had abandoned the project after some weeks without one single update, but now the time's coming for you to play our visual novel, after all!
We have to admit, according to our first plans this game should've gone out very earlier, but if you ever tried to develop any kind of software, you know how many problems can be encountered during the whole process, and how much difficult can be to fix them all.
This being said, we cannot wait to let you play our game, so we added a countdown at the top of this post. See you later!
Pubblicato da Spinto Studios a 14:47 Nessun commento:

A month of beautiful art and unexpected results has passed, and now the Deviantart contest is over. We've received almost 30 Akumangel-styled deviations, which lulled us through the pains of game developing and kindled the flame of our passion. But now it's YOUR turn to declare the winner!

Just click here to submit your vote. If you want to read the official announcement with the finalist, just head down there instead.

More news, this time on the state of the game, will arrive soon!
Pubblicato da Spinto Studios a 09:37 Nessun commento:

Right now, the goal of releasing Akumangel is not too distant. The game works, the features are all there. The only thing that is missing, right now, is the English translation.

Crafting a well-tought, polished translation will require some time, expecially since we're so little experienced with writing in English. However, the more we work on it, the more we recognize how naturally the characters behave in this language. It just feels right.
We will do our best. However, if someone out there is a native speaker and wants to lend us a hand by checking the quality of our translation, just leave a comment or contact one member of the staff! We always appreciate help.
Pubblicato da Spinto Studios a 17:35 Nessun commento:

Hey fellas! The Madhouse Swing is entering its final stages of development, and it's ready to hit its stride! To celebrate the occasion, we've organized a little art contest down at Deviantart. The artistic inclined can enter the competion to win money, deviantart points, free art commissions, as well as a chance to be featured in the game! 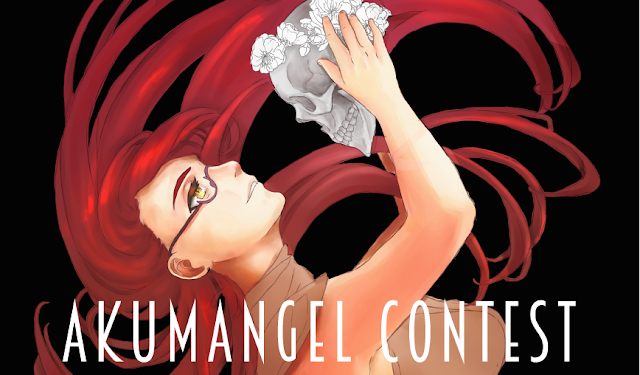 All you have to do is draw some fanart of the game characters. Any kind of media, content and style is welcome as long as it abides by Deviantart rules. We're for creative freedom here!

You can see more detailed informations here.
Have fun, and don't forget to check our blog for some juicy updates coming soon!
Pubblicato da Spinto Studios a 04:07 Nessun commento:

Akumangel: The Madhouse Swing is a free visual novel powered by Ren'Py visual novel engine, entirely crafted in Italian and English.
It was born as an experiment that the Spin.to Studios decided to make in order to concentrate on a very short project (if compared with the first Akumangel). The purpose was to create a good quality product in a relatively little time and with more or less no budget; to do that, we had to compress the game in 2-3 hours of gameplay, but we sincerely hope we've produced an interesting story, enjoyable even by those who never played the original game.

At the moment, the script and the soundtrack have been completed, so you're not going to wait more than 1 month and a half before having the final version in your own hands, but we'll certainly communicate a release date in the next weeks, so stay tuned!
There's not much more to say so far, the first updates are incoming in the next few days.
Pubblicato da Spinto Studios a 03:53 Nessun commento: